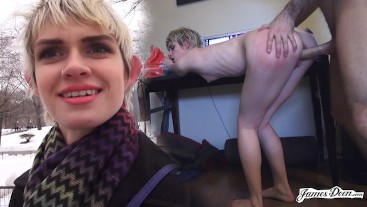 One hundred percent. No hate mail — not at all. It was a little intimidating meeting up with him the first time. I met up with him to fill out paperwork and we were chatting and this was all on video — he recorded most of it.

It took me a little while to warm up to the idea that I was actually going to do this and it was all pretty normal. If something presented itself where it was kind of the same scenario — if I got to warm up to the person and get to know them.

No, not really. I do it more for the experience of it. Not exactly. It seems more realistic to me and I like that. And Colton was just a name that I picked that I liked.

It really depends. I specifically enjoyed the experience with him because it felt like we were hanging out and having sex. It wasn't impersonal, like having a job to have sex with someone.

I don't know if I could do that or not. That's why I feel comfortable doing that with him. How did you get the idea to shoot a scene with him?

I thought I wouldn't hear back, but I did, so I had to decide whether or not to do it. Did you have any hesitations about doing it?

One hundred percent. I took into account everything I could think of -- people who would want to employ me in the future and my family, people that I know finding out, but I just decided I wanted to do things I wanted to do and I wasn't going to let other people stop me from doing that.

Do a lot of your classmates know? Since it was on the NYU Local website, I assume some of them are subscribed on Facebook and saw the article, but no one has mentioned it to me that I haven't told myself so far.

No one has said anything to you?! They probably won't want to make me uncomfortable or they think it's uncomfortable to mention it or something like that.

So this is very different from the Belle Knox situation. You didn't get any hate mail? No hate mail -- not at all. I've been talking about the feedback Sadaaf [Mamoon, writer for NYU Local] is getting and she's only getting positive feedback about it.

And also, the people I've told are my friends and I'm friends with people who are sex-positive and totally liberal and are cool with people doing their own thing.

I haven't heard a ton from people who haven't agreed with that, so I can't really speak for them. Were you starstruck? It was a little intimidating meeting up with him the first time.

I didn't know what to expect. He's a really sweet guy and not that much taller than me, so not physically intimidating. How much time did you have to warm up before you shot?

Big ass shaved pussy swallow. Massage-X - Massage guru Diana Dali. Sexy hardcore teens. And she goes on the lot! Know what i like.